In a clear sign that the Great Resignation is far from over, the ‘What Workers Want’ survey by New Possible has found that some 40% of UK employees are likely to look for a new role in the next 12 months, unchanged from last year.

We also found that the average job satisfaction rate across all sectors has fallen to 70%, down from 72% last year. Employees working in the creative arts sector once again reported the highest levels of job satisfaction (81%), with those working in public services emerged as the least satisfied (64%).

In this article we analyse the responses from 2,027 UK employees to help us understand how employees are feeling about the world of work. We’ll also identify what’s driving employees to search for new roles and highlight the benefits they value most. We also look at how wellbeing has changed vs. the previous year, along with expectations around pay and job security.

What motivates employees to stay in a role or jump ship to another company?

To identify the key drivers that motivate employees’ decisions to stay or leave their jobs, we asked respondents of our ‘What Workers Want’ survey to tell us about the best and worst aspects of their jobs. The responses were then split into the following two groups and processed by our AI model: 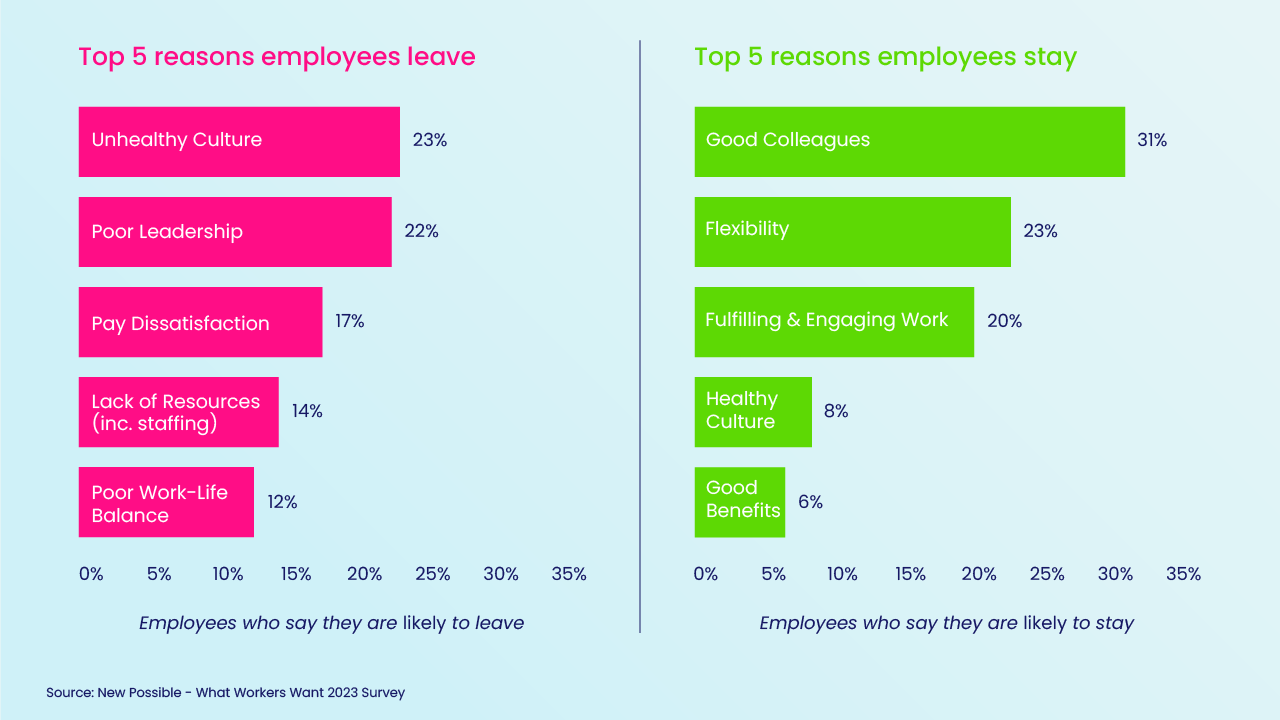 Unhealthy culture and poor leadership (inc. managers) are the key drivers behind employees leaving. When either driver is mentioned by an employee, they’re much less likely to praise other areas of the people experience. Below we highlight the words used by employees to describe what an unhealthy work culture means to them: 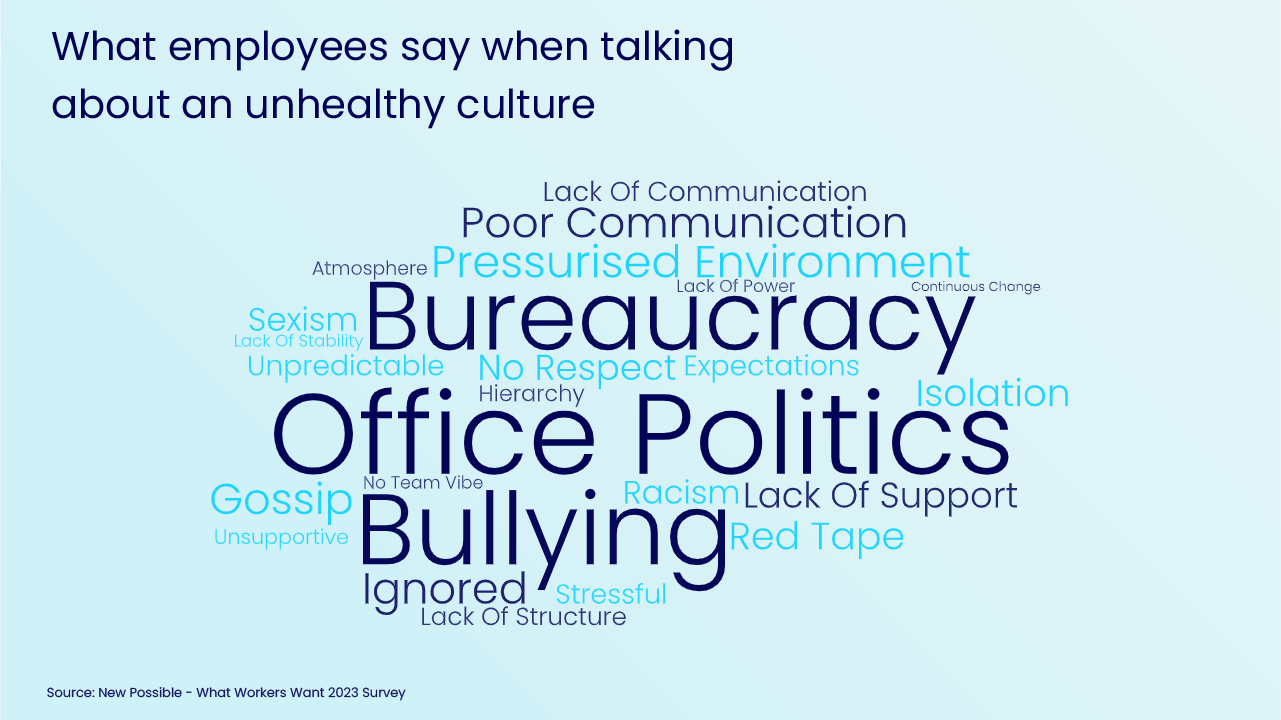 Employees were asked what they thought a ‘fair salary increase for 2023’ would be. Here’s what they said: 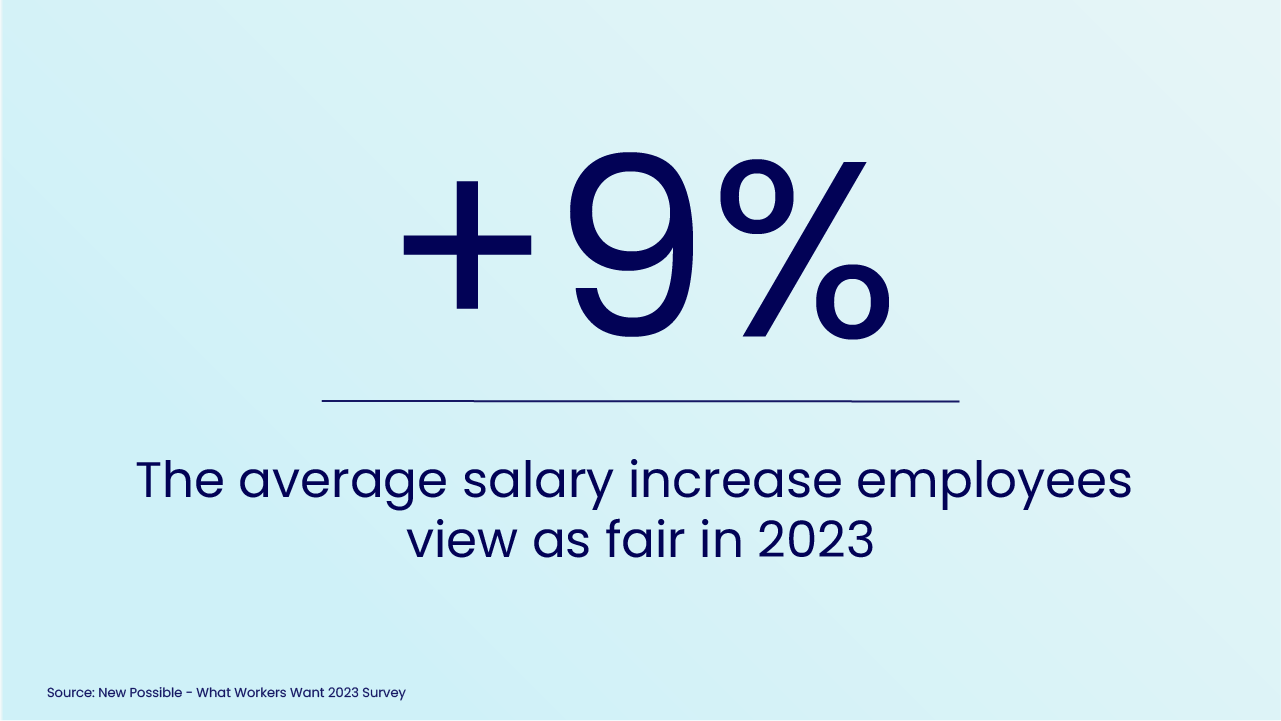 With inflation at 10.7% (November 2022), pay is also increasingly on the minds of employees. While only 17% mention pay when thinking of leaving, this is a marked increase from 10% a year ago. When asked what employees think would be a fair pay rise in 2023, the average response was 9%.

What other drivers are motivating employees to think about leaving?

Insufficient resources were also a common complaint cited by our survey respondents, with staff shortages in particular leaving employees feeling overworked. Employees also reported wanting to see greater investment in technology to help make their jobs easier. A lack of staff also impacted the work-life balance of employees, particularly in the hospitality and retail sectors. In these two sectors, labour shortages often mean that staff can be spread particularly thinly, and 28% of employees that are planning to leave mention dissatisfaction with their work-life balance.

When looking at what employees who are likely to stay value most, 31% mention good colleagues. It’s clear that developing a culture that promotes positive relationships with the people we work with can have a significant impact on retention.

Flexibility was the second biggest driver behind why employees stay, in-line with last year. We define flexibility as a way of working that suits an employee’s needs, for example having flexible start and finish times, or working from home.

Flexibility can also help make workplaces more inclusive, as illustrated by comments such as ‘flexible hours help me as a mum’ and ‘a hybrid approach enables me to work around my disability’. Creating a culture that supports flexibility requires leaders to listen and trust their people.

People are also seeking work that’s purposeful, with 20% of employees that are likely to stay in their role talking about the importance of fulfilling and engaging work.

While only being cited as the fifth reason why employees stay, good benefits were also linked to higher retention. Below we look at what benefits employee’s say they value most.

Survey respondents were asked about what benefits matter most to them when looking for a new job, with flexible hours (75%), working from home (57%) and more holiday (44%) once again emerging as the most popular benefits. 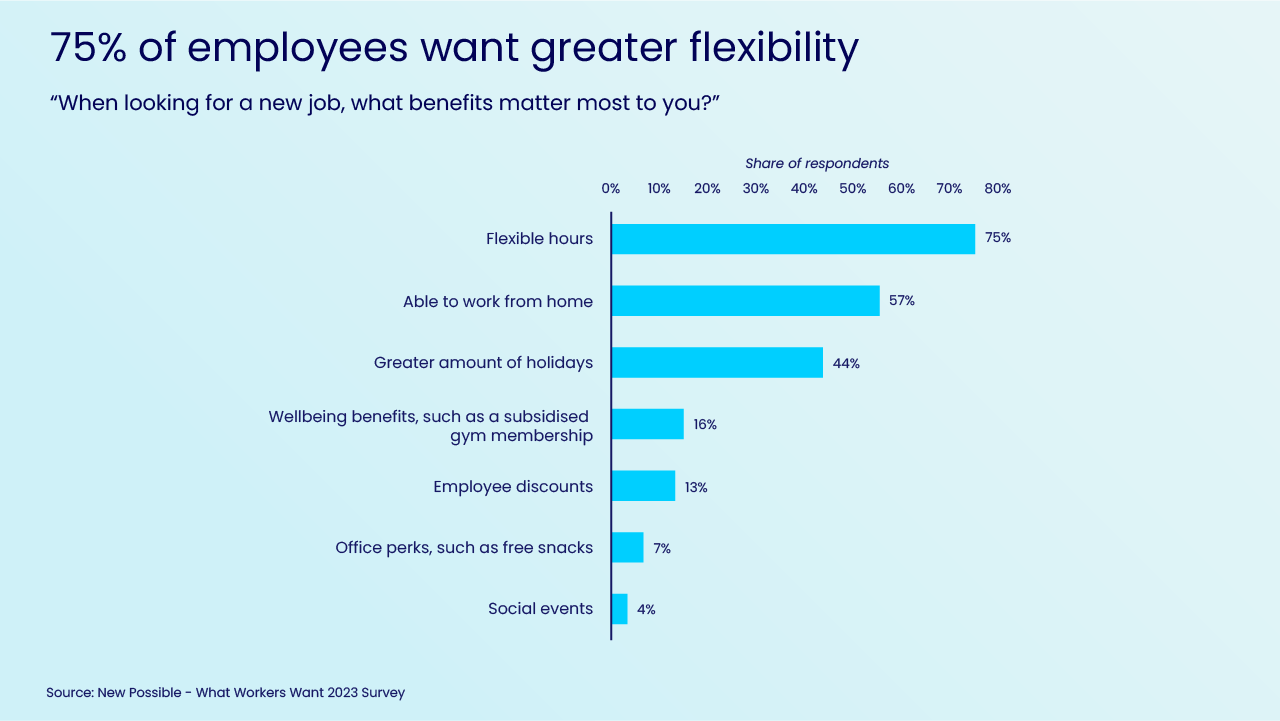 When looking at key differences by age, 66% of 18-34 year olds want to be able to work from home. Younger workers were also more likely to value wellbeing benefits, while 13% of 18-24’s said social events mattered (vs. 4% across all age groups). The demand for flexible hours was greatest among those aged 25-34 (80%).

34% of employees say their wellbeing has worsened

2022 had been a taxing year on people’s wellbeing, with the cost of living crisis and the effects of labour shortages being just two of the factors contributing to this. 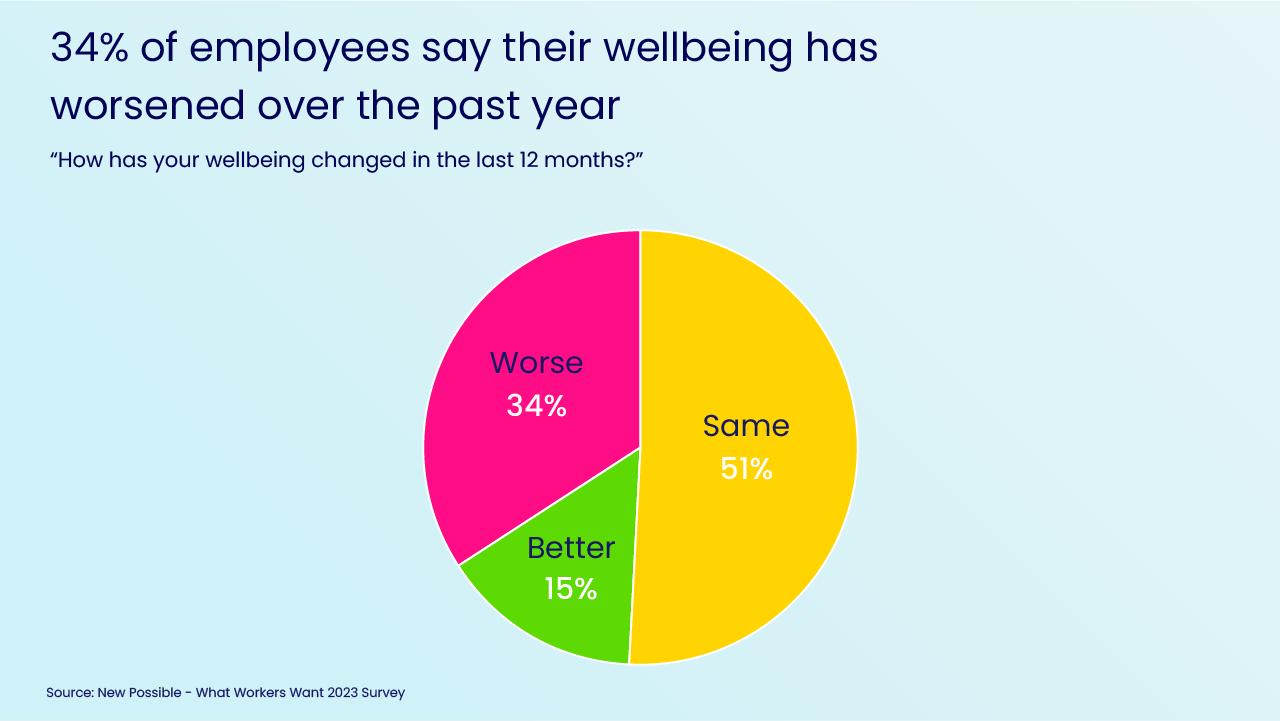 Employees in the retail, education, and transport sectors suffered the biggest drop in wellbeing, with 41% on average saying that it had become worse over the past 12 months. 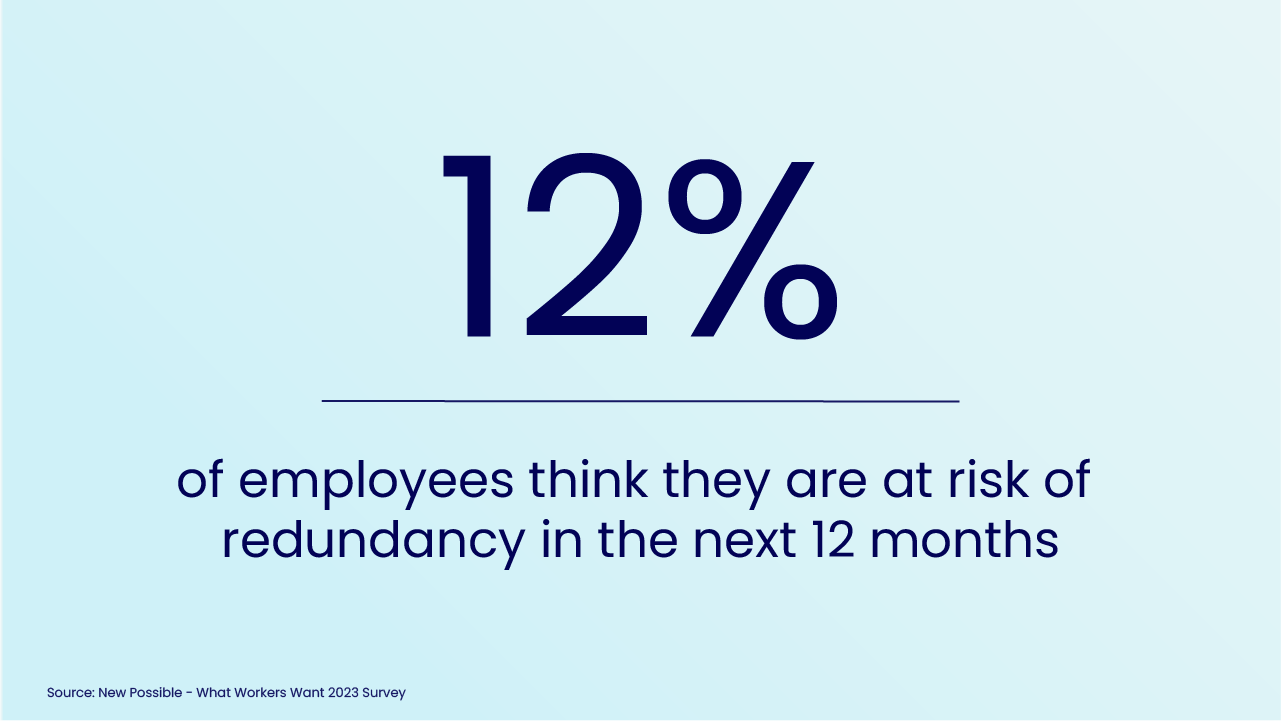 Employees in technology (29%), retail (20%), property (18%) and hospitality (15%) were most likely to report feeling at risk of redundancy. In contrast, employees in healthcare, sales and IT felt the least risk.

Average job satisfaction across all sectors is 70% (down from 72% a year earlier). Employees in the creative arts sector strengthened their lead at the top of the table. In contrast, workers in public services continue to be among the least satisfied. 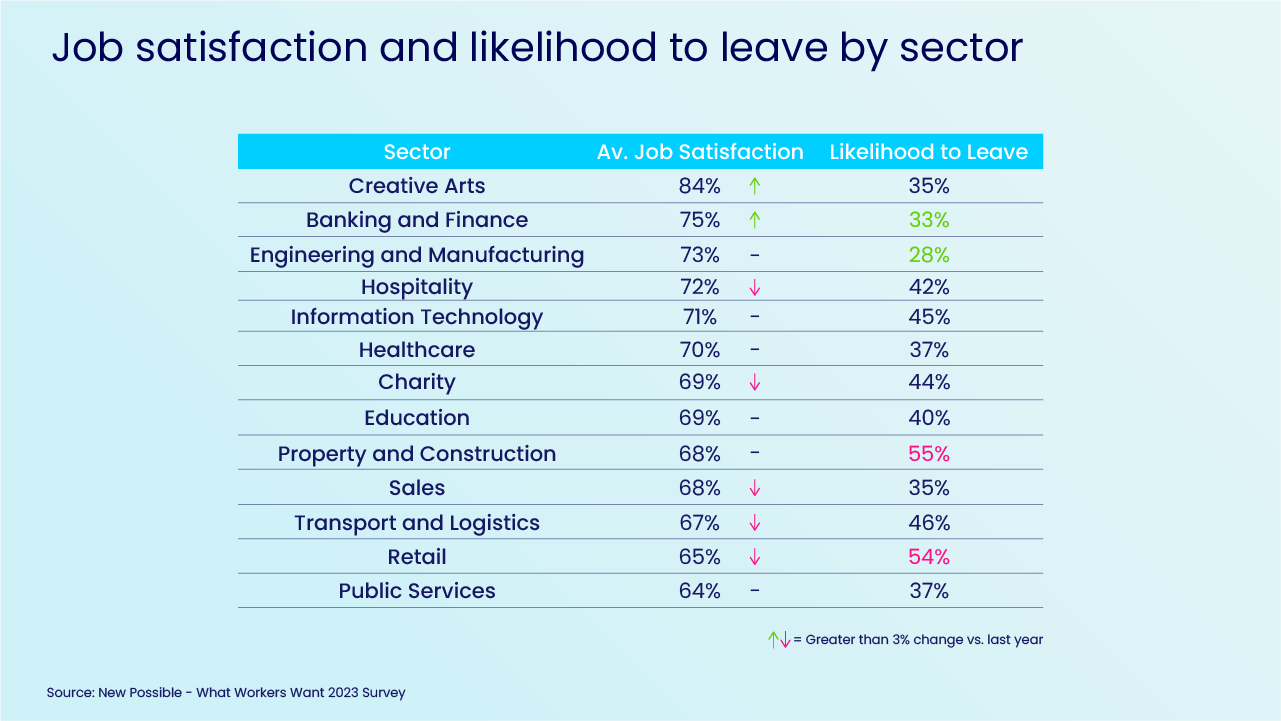 Satisfaction across the banking and finance sector increased markedly, with employees also saying they’re 9% less likely to leave vs. last year. Conversely, the sales and retail sectors had the largest drop in satisfaction, with retail also seeing the second highest likelihood to leave (54%).

Gen Z and millennials continue to lead the Great Resignation

Over half of employees aged 18-34 say that they’re likely to search for a new role in the next 12-months. When examining the reasons why, dissatisfaction with work-life balance and pay were the most significant drivers. Fulfilling and engaging work was also cited as a key reason why employees in this age group remained loyal. 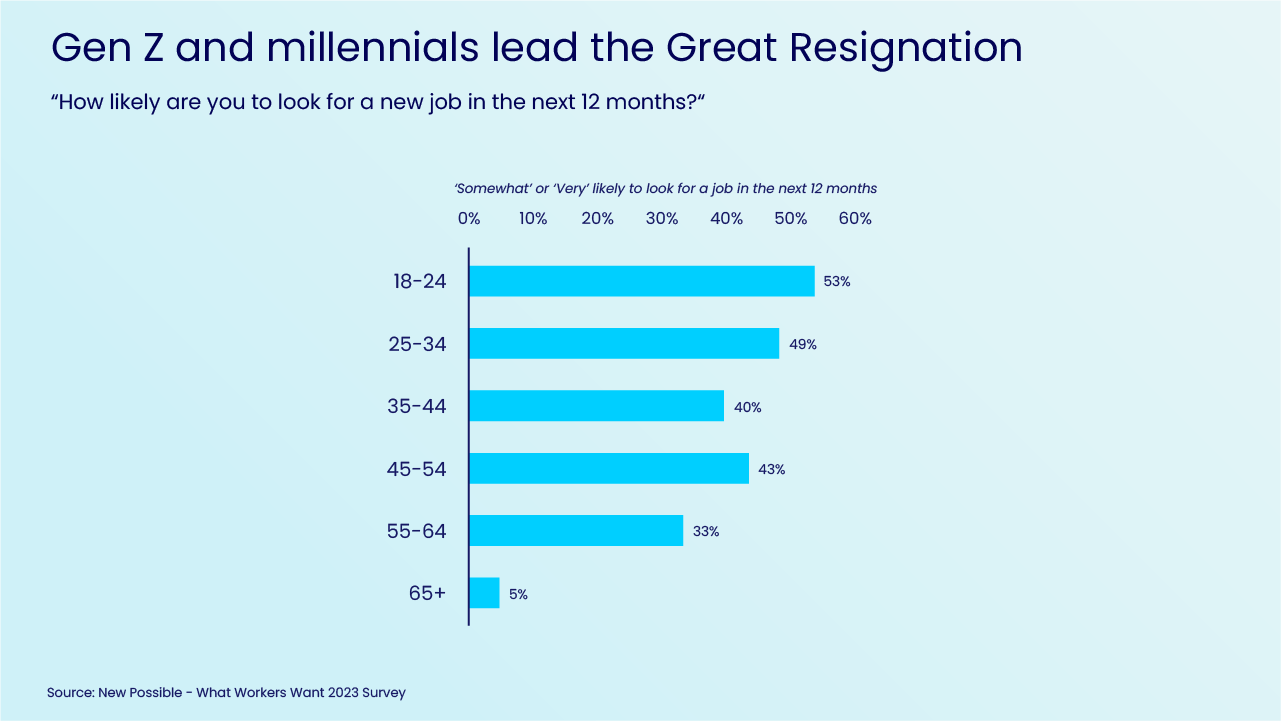 New Possible, an employee insight platform, is on a mission to help every leader unlock the competitive advantage of their people. We work with a range of sectors to provide clear, actionable, and benchmarkable insights across the employee lifecycle. Our NP360 survey helps leaders gain meaningful insight into the broader people experience, measuring 7 themes, including satisfaction, culture, and wellbeing. Book a demo to learn more.

If you’d like to discuss this research further, please email hello@newpossible.io or call 0161 706 0618.

Back to the blog